The Irish Hit Parade began its historic run on radio station WRYT (950 AM) in September 1967. Actually, that’s not entirely accurate. At its beginning, the Irish hour was called “The Irish Hour” because it was, literally, a one-hour block of Irish music initially hosted by a gentleman named Pat McDonough.

The very earliest history of the program remains somewhat vague and murky. Somewhere before or around the time when Carter Broadcasting took ownership of WRYT in 1977, the “Irish Hour” had morphed into the “John Latchford Show” and had expanded to occupy a significant portion of the broadcast day each Saturday.

Latchford’s enthusiastic – often zany – air presence, coupled with his knowledge of traditional and popular Irish music and the foremost recording

artists of the genre, provided singular and infectious content for Irish and Irish-American music enthusiasts. The result was a marvelous match for a thirsty “Boston Irish” listening audience, which grew profoundly over the Latchford years.

The ongoing success of Irish programming encouraged the station’s (now WROL) owner and president Ken Carter to expand its Saturday hours in the spring of 1982. Now dubbed the “Irish Hit Parade”, the program welcomed a new Saturday afternoon host, Paul Sullivan, to the “on-air” roster. Sullivan had worked at the station – and on the program – as a commercial producer and announcer since 1977.

When Latchford retired from the IHP in 1986, Sullivan moved to the early Saturday daypart and the personable Matt O’Donnell became the show’s late day personality. Paul Sullivan and Matt O’Donnell continue to present the Saturday Irish Hit Parade to this very day, with a remarkable and historic tenure of over seventy broadcasting years between them!

In 2001, Ken Carter sold the bulk of his broadcast properties to the Salem Media Group. Under the Salem leadership of Alex Canavan, Pat Ryan, and Carole Howley Simmons, the Saturday program continued to thrive and grow, welcoming a host of other talented hosts including Denis O’Gorman, Christy O’Connell, John Fitzgerald and now Bill Bailey, the inexhaustible, shamrock-chasing host of the “Bailey Ceili” segment. Very shortly after Salem’s IHP acquisition, Seamus Mulligan, an icon in Greater Boston’s Irish-American community, brought his internationally-heralded “A Feast of Irish Music” to WROL’s Sunday schedule.

The relatively “new kids” on this Irish block are John “The Rooster” Costello, who opens every Sunday for Famous Seamus, and the versatile,

engaging and multi-talented Bobby Brooks. Both continue to respectfully pass along and promote the history, tradition, heritage, and indivisible cultural fabric of the IHP to a new generation of wonderfully loyal listeners. 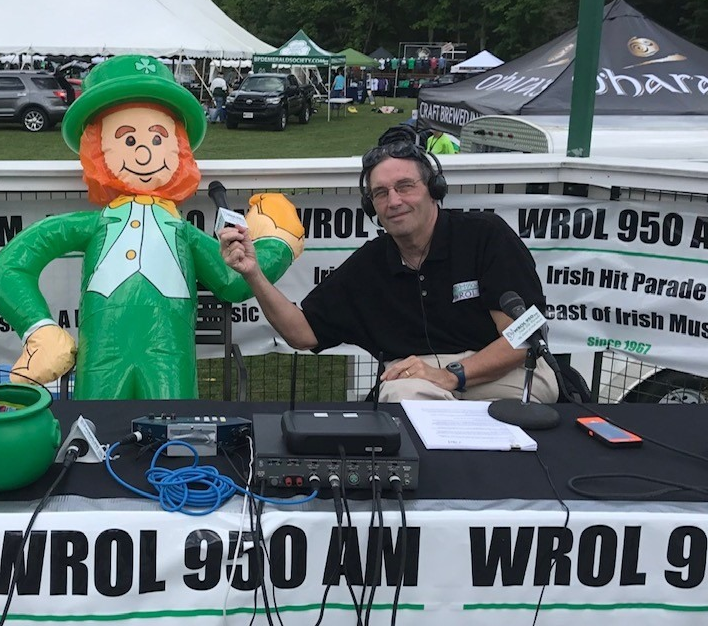